Well, if there's one thing you should know about me, it's that I am not patient. I hate waiting in line, in traffic, for food, literally hate it. So these few days have made me feel like a lunatic. I am not ashamed to say that I tested 2dp3dt because I was just being crazy curious. Stop it! I can hear your heads shaking from here.  I hadn't felt any symptoms and just needed to do something to let out some of the pressure. My progesterone was low so they started me on endometrin vaginal torpedos suppositories. 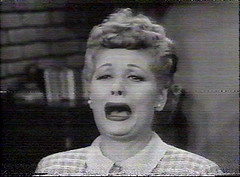 I am also still on PIO and I am super sore in my hips and starting to itch and have lots of red welts. The extra surge in hormones finally pushed me over the edge on Tuesday and I lost my sh!t. I was sobbing uncontrollably because I felt so bad about praying and asking for a baby when I don't know who exactly I was praying to. ( I am pretty lost spiritually) My wife found me in the shower in full on Lucille Ball style-ugly-faced-snot-nosed-cry.  "I just want to be pregnant soooo baaaaaaadddd and I need to go to chuurrrrrchhhh." I said between sobs. She was pretty caught off guard, but managed to stifle her giggles and comfort me . After that I felt so much better. And I realized that I missed praying, and I have become a little cynical when it comes to organized religion and need to find some faith-literally.  I'll revisit that later.  I did test again on 5dp3dt and it was negative. I was not sad though-I think I'm just trying to prepare myself for the worst. I was so torn about being superstitious and extra guarded or just having faith and thinking positive. You're damned if you do, damned if you don't my friends.

I  think I have been feeling cramps from the progesterone, implantation, impending AF gas. It's been mainly on my left side. I have had a few fat bastard moments with an insatiable appetite for anything sweet. (talking a tub-o-sea salt brownies in one sitting ya'll) I've been waking up with horrible night sweats and a pounding pulse. I can literally hear my heart beating in my head. I have been having the most vivid weird dreams. I just think it's from the pregnancy progesterone. I got a light duty note for work and couldn't muster up the courage to give it to my manager. I don't now why- I just feel nervous about saying " I can't work too hard beacause I might be prego" and then if they ask how far along I am and I say 9 days-I just can't do it yet. I'm off for the next few days and if I test positive I will give them a heads up. My wife said I have to. Beta is the 24th.

I got home from work this morning and took another test. My wife busted in-she has a sixth sense when I am being bad. I swear I saw something! She said no way and I was being crazy. I went to sleep and took another one this afternoon.  Get your magnifying glass out, this is what we got:


So as you can see, things couldn't be crazier better. Keep praying, crossing fingers,  avoiding black cats, or whatever it is you do to keep the optimism alive. We appreciate everyone rooting for us. <3
Posted by Unknown at 6:32 PM